How would you teach programming to a beginner?¶

While I’ve never taught programming professionally, I’ve had various discussions with beginning and experienced programmers about the subject, and mentored some software engineers. This post contains some of my reflections on this, and especially on what is required to teach an adult with none or very little technology background enough skills so they can perform well as a professional software engineer.

Software development is based on abstractions. It seems that the mainstream method nowadays, when teaching programming to beginners, is to begin with a high level of abstraction, i.e. the most accessible concepts: 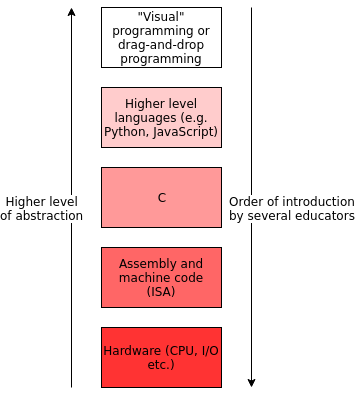 The main upside of this strategy seems to be that on the face of it, the general programming concepts are easy to explain. One can use several metaphors for explaining basic concepts such as branches or loops, and skip long-winded explanations of the inner workings of a computer, a software library or a framework.

While I think this approach is a good choice for teaching programming basics to children, I think it can cause confusion for adults or high school students beginning to learn programming. I’ve seen different kinds of confusion arise: “Yes, I understand how I can use the framework to do things for me, but…”

Some courses or educators begin with a bit lower level than what I call “visual” programming, e.g. by focussing on teaching Python, or JavaScript. This is great for focus but I’ve seen somewhat similar confusion arise: “I now know this language, but…”

Apart from these issues, a symptom of using a specific environment or a framework has been that it’s not clear to the student what is environment or framework specific and what is generic. Furthermore, generic concepts might not be clear; for example, the student might not understand the relationships between variables, types, and functions, especially if object-orientation is brought into the mix early.

While e.g. teaching JavaScript may be enough for a student wanting to fully focus on front-end development, if the student wishes to gain a deeper understanding of programming then I advocate teaching the concepts in reverse order instead:

After these steps, the student should in theory be able to write “any” run-of-the-mill software: when faced with a problem, possibly constrainted on a programming language or framework previously unknown to the student, the student should be able to both find out how to use the given language or framework and write the necessary code to solve the problem, possibly with the use of external libraries. I think that if the student has built up the understanding of the concepts bottom-up, then it is easy to move up and down on the abstraction hierarchy as needed, and also be better prepared for leaky abstractions.

This doesn’t replace a full, proper Computer Science program, but on the other hand, it is a lot more material than some programming courses I’ve seen, and in my view it’s enough knowledge for an entry level software engineering position. I followed this philosophy as I wrote my book, and am curious to learn from my readers how their experience has been.