4.2. A fistful of Python exercises

4.1.10. Monolithic way - merging and putting it all together¶

We now have the logic to create incoming bus data from GPS as well as from the schedules. Let’s merge these to the final output that will be shown on the display.

Like in Python, our merging logic could work e.g. the following way:

The output data format can be the same as the input data format, i.e. data that tells the route number, assumed arrival time and the kind (scheduled or estimated from GPS data) for each bus. Once we have this data we can create the labels required for the display.

Here are some hints to help you get started:

This code searches the vector “vec” for a tuple which has the values “route_nr” and “start_nr”. std::find returns vec.end() if the element was not found. Hence, e.g. the following code would remove all elements from a vector “vec1” that are included in another vector “vec2”:

Exercise: Implement the merge function and test it.

We’re starting to have a decent program but it’s not yet parsing the command line options (unless you already added it). We’d want to support e.g. the following command line:

Here, the first parameter is the bus stop name and will only be used as a string to display on the final screen. The next three parameters are input file names. The final one is the current time.

To be precise, according to the spec, the process should only receive only one parameter, namely the bus stop name, but we can make things a bit simpler for us for now. If necessary we can wrap most of this in a shell script if necessary, except for the time stamp. While we could query the current time stamp in our code, for now we can make things simpler (and easier to test) and supply the time as a command line parameter.

One question when implementing the command line parsing might be about parsing a timestamp in format “hh:mm”. We need to split this string by the “:” character, similarly to s.split(‘:’) in Python. This can be done in C++ e.g. using the following code:

Going this line by line:

Exercise: Look up the reference for the function std::string::substr.

Exercise: Add command line argument parsing to your code. It should receive the current timestamp in “hh:mm” format, the name of the bus stop to display, and three file names for the schedule data, historical and current GPS data respectively. Check the value of argc to ensure you’re receiving the correct number of parameters. Exit with an error message and a return value of 1 otherwise.

As part of our sections around SDL we put together a program that will display the labels as required, and take a filename as input which must contain the labels to be displayed. While we could generate such a file in our C++ program and then call that program, the cleaner way seems to be to call the existing code directly.

What we need to do for this is:

Now, in order to use both our existing SDL code and our new C++ code together, you have a couple of options:

As the first one introduces duplicate code we’ll go with the second option.

A header file in C and C++ typically describes the interface of the functionality implemented in the corresponding .cpp file. This means that it shouldn’t have any function definitions but it should declare the functions that are defined in the .c or .cpp file and define the data structures (including classes) that may be used from other files.

In our case, our header for exposing the SDL functionality could look like this:

Let’s see what we have.

We should end up with e.g. have the following structure:

The following diagram summarises the dependencies. 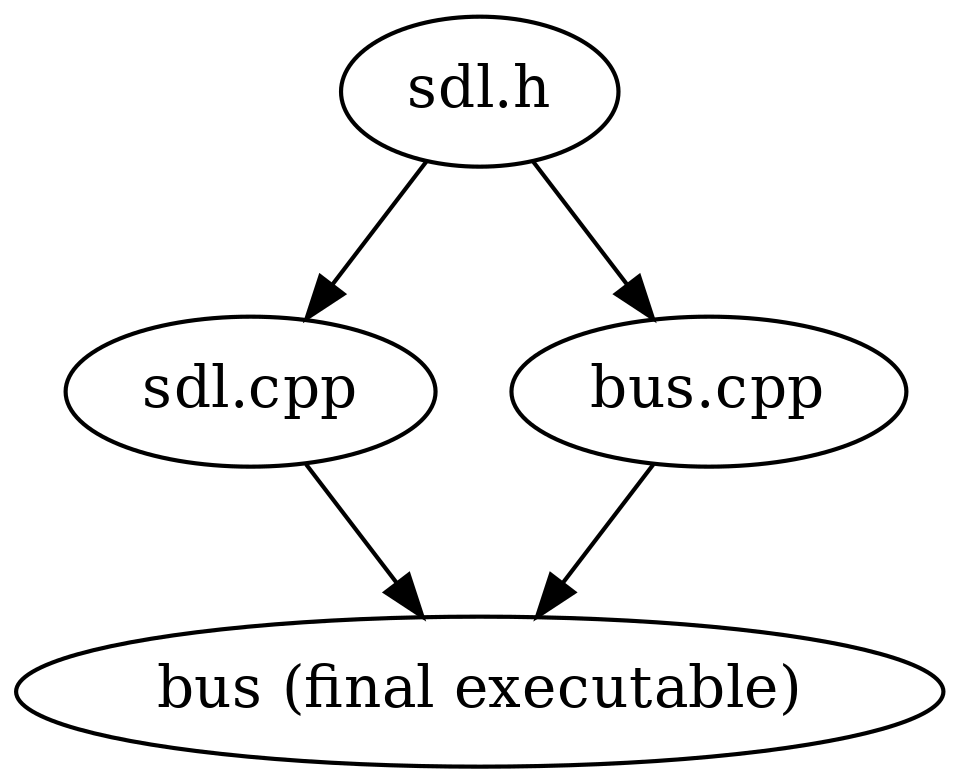 Now, generally in C and C++, source files are compiled to object files (binary files including the machine code instructions that were generated from the input C code), and one or multiple object files can be linked to an executable. When you run e.g.:

…what the compiler actually does is implicitly convert all the intermediate steps to one. To explicitly compile an object file and link it to an executable, you’d do:

Here, we first instruct the compiler to generate an object file with -c, then ask the compiler to link the final executable (by not specifying -c), passing it the object file as input. (Instead of calling g++, depending on the C++ compiler, one could also call the linker directly, e.g. ld.)

Here, we pass the compiler two .cpp files to compile to a single executable. The compiler compiles each file separately, and finally invokes the linker to link them.

Alternatively we can use:

Here, we explicitly compile each .cpp file to an object file by passing -c and finally tell the compiler to link all of them to an executable. The good thing about this method is that is improves the time it takes to compile our program; the former will always compile each .cpp file while with the latter, you can skip compiling the .cpp files that haven’t been changed since the last compilation. Makefile rules come in handy here.

#include <header> or #include “header”?

We’ve seen two ways to include headers: either using the angled brackets or quotes. The difference is in the path the C++ compiler uses to find the header file; for angled brackets, it searches in the system directories which are dependent on the compiler and typically include the libraries installed on the system while the quoted brackets mean the compiler first searches in the local directory before going to the system directories. Typically you should use quotes for the header files in the project you’re currently working on, and angled brackets for libraries that aren’t included in your current project. SDL2 recommends a bit different approach and suggests the user should always use quotes for including SDL2 headers.

Furthermore, you can specify more directories to search for headers when invoking the compiler. The switch -I followed by a path adds the given path to the list of directories to use when searching for headers. E.g. the SDL2 command sdl2-config –cflags, which we use during compilation, could include e.g. the string “-I/usr/include/SDL2” when expanded, meaning the compiler should look for the headers in that directory.

Here, we pass the include path to the compiler while compiling using the -I switch, such that the compiler will be able to find the SDL2 header files.

After compilation, we pass the compiler the path where to find libraries using the -L switch, and tell it which libraries to link using the -l switch (in this case, SDL2 and SDL2_ttf).

Exercise: Use our SDL code from our bus logic code. Create a new header file or files as necessary. Compile and run your code. Fill out all the holes so that your code will do everything: parse the input files, generate the labels required for the display and display the labels. Create an std::map to map route numbers to names.

If you made it here, congratulations.