Now, we can start implementing our Puzzle class. From data point of view, this is nothing else but an array of cells. Let’s declare this:

Exercise: Implement the constructor and the “solved” function. The constructor doesn’t need any contents as the array elements will be constructed using the default constructor for Cell, which as per the previous exercise initialises the cell such that all values are possible. The “solved” function will need to check whether all cells have only one number, and only return true in this case. (Initially, it should hence return false.)

Now, we can look into actually constructing an object of class Puzzle by reading a Sudoku puzzle from a file.

As per Norvig, let’s define the file format for a Sudoku puzzle such that a number in a file defines the value for a cell, while either a dot (.) or a zero (0) denote an unknown cell, and all characters can be ignored. This means that e.g. the following line is a valid puzzle (courtesy QQWing, an open source Sudoku puzzle generator):

Now, let’s write the code to read this. In C++, one can read a file to a string with the following snippet (this uses the first parameter given to the program):

Now that we can read file into a string, let’s turn this into a puzzle. We want to implement the following: 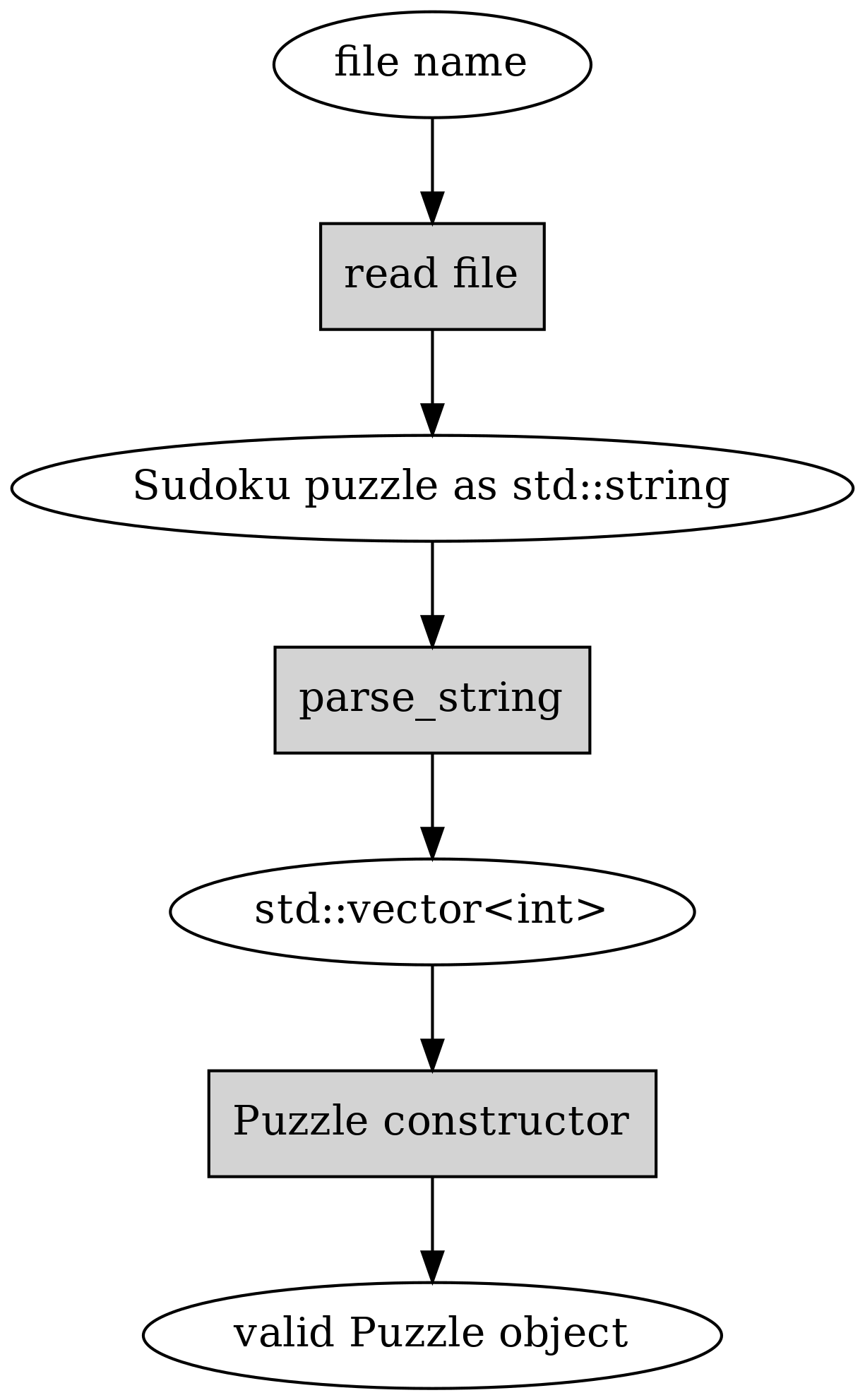 In other words, we want to read the file to an std::string, pass this string to a function called parse_string() (which we still need to write) which shall convert the std::string to a vector of integers. Once we have a vector of integers we’ll pass it to our Puzzle constructor which shall use this vector to set the correct values in the member variable of type std::array<Cell, 81>. Phew!

The interfaces for parse_string() and the Puzzle constructor would hence look like the following:

We see here how the Puzzle class constructor shall receive an std::vector<int> as input. Each element in the vector should either be a number between 1 or 9, denoting a pre-filled cell, or something else (like 0) to denote a clear cell. We should also have a function “parse_string” to turn the string to an int vector.

As a skeleton, let’s put something together that also introduces character-to-integer conversions in C++, exceptions and reference parameters.

Let’s go through this line by line:

Digression: What do you mean, “subtract the ASCII value”?

You may remember from the section “C and strings” that ASCII is a mapping between characters and numbers. Our variable ‘c’ is a character, but also a number. E.g. the character ‘3’ is equivalent to the number 51 in ASCII. Hence, by subtracting 48 (‘0’) from ‘c’ we end up at the number which the ASCII character represents. By pushing the result of this subtraction to the std::vector<int> we implicitly convert the result to an int.

Exercise: Implement the above function. Fill out the correct code for the TODOs such that the return variable is updated correctly and returned. See if you can run it without an exception being thrown with the example input from above.

Now that we’re able to parse a string to an int vector, let’s turn this int vector to a Puzzle.

Exercise: Rewrite the constructor of the Puzzle class to take an int vector as a parameter, and loop through it to set the contents of the “cells” member variable. Use the “set” member function of the Cell class to set the values.

We’re now able to read in a Sudoku puzzle but have no visibility over the contents of the Puzzle class. To remedy this, let’s write a function to display the puzzle. Here’s the declaration:

That is, a public member function which doesn’t modify the object.

Now, we can implement this function by looping through the array of cells, and for each cell, print out something. What we print should have the same number of characters for each cell for proper formatting. The simplest way to do this is to either print out a number if a cell has one, or a placeholder (e.g. a space or a dot) otherwise.

Exercise: Implement this function and test it.

We can now start thinking about the meat of our program: actually implementing the first strategy of constraint propagation. Recall that what we want to do is:

In order to implement this, what we need is:

Recall that the peers of a cell are the cells that are on either the same horizontal line, on the same vertical line, or in the same 3x3 sub-grid, i.e. in the same unit as the cell.

On the interface for our function that finds the peers, it seems like an easy way to encode cell positions could be to use integers which represent the index in our cell array. For example, an integer 0 would mean the first element in our array, or the cell at the very top left in the puzzle. The integer 50 would represent 50 % 9 = 5th column (0-indexed) and 50 / 9 = 5th row, or the bottom right cell in the middle 3x3 sub-grid.

This suggests we have the function declaration:

That is, our function takes an integer as a parameter (which cell to find peers for), returns a vector of integers (which cells are the peers), and doesn’t modify the data within the Puzzle object. Furthermore our function is private as it’s not necessary to call this function from outside the class.

Now, here’s one way to find the indices to the cells that are in the same vertical line:

Let’s go through this in detail.

Exercise: Add the logic for the horizontal lines and the 3x3 grids in the above function. Try it out.

You may have noticed that our function above not only does not modify the data in the Puzzle object (“cells” array), it doesn’t even read it. This means it could actually be a free standing function and doesn’t have to be a member function of the Puzzle class. On the other hand, it may be convenient to group functions that are relevant for certain classes together. There’s a mechanism for this: static member functions. You can declare one by including the keyword “static” at the beginning of the declaration. You’ll then need to name the class when calling it. Here’s an example:

You mustn’t use the keyword “const” to annotate the function const as it’s a static function and hence won’t be able to access object data anyway.